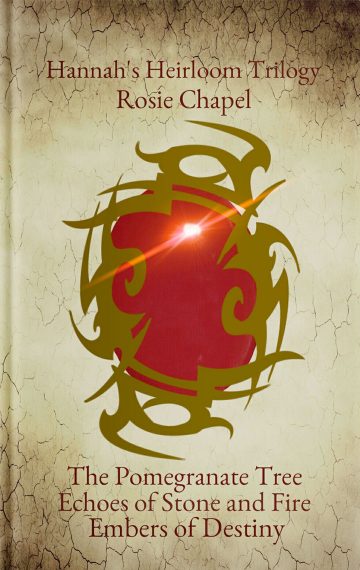 When Hannah Wilson decides to accompany her best friend to Masada, in an attempt to discover the origins of a ruby clasp, she has no idea how much her life is about to change. A series of extraordinary events sees her somehow connect with an ancient ancestor, also called Hannah, who is a Hebrew woman and a healer, brought to Masada by her brother when a group of rebels stormed the citadel in AD 66, killing nearly all of the Roman soldiers garrisoned there.
These three books trace the journey of both women, from Masada to Pompeii and on to Roman Britain as their destinies become inextricably entwined. With one sharing the knowledge that could save the other and those she loves from certain death.

The Pomegranate Tree
Hoping to trace the origins of an ancient ruby clasp, a gift from her long dead grandmother, Hannah Wilson travels to the fortress of Masada with her best friend, Max. Strange dreams concerning a rebel ambush begin to haunt Hanna and following a tragic accident, she slips into the world of Ancient Masada.
A woman out of time, Hannah must rely on her instincts and her knowledge of what will befall this citadel to survive. Will she escape, or is she doomed to die along with hundreds of others as Masada falls – and what does any of this have to do with an ancient ruby clasp?

Echoes of Stone and Fire
Pompeii – a vibrant city lost in time following the AD79 eruption of Vesuvius. Now rediscovered, archaeologists yearn for an opportunity to uncover the town’s past. Some things however, are best left alone – revealing the secrets hidden beneath the stones could prove perilous. Hannah and Max are brought to Pompeii by a surprise invitation to join an excavation team who are trying to uncover the city’s long history.
After entering an excavated house that bears a Hebrew inscription, Hannah’s two worlds collide and she falls back through time to ancient Pompeii. A place where her ancestor is a physician to gladiators engaged in mortal combat, where riotous mobs run amok and where a ghost from the past returns to haunt her.
Will Hannah and her loved ones manage to escape the devastation she knows is coming, before the town is engulfed in volcanic ash? Will she ever find her way back to Max the love of her life, waiting not so patiently millennia away? Or will echoes be all that remain?

Embers of Destiny
AD80 ~ Hannah and Maxentius must embark on a new journey to Northern Britannia. This harsh frontier is far from the comforts of Rome and danger lurks where least expected; a garrison of soldiers, some unhappy with their isolated posting; local tribes, outwardly accepting of their Roman occupier, but who may still resent the seizure of their lands.
Millennia away, Hannah Vallier finds a familiar item while working in a museum near Hadrian’s Wall. It is the pomegranate; carved by Maxentius on Masada. Before Hannah can discuss it with Max, disaster strikes! Believing her husband has been killed, Hannah retreats into the past, her soul melding with that of her ancestor, but with little idea of what they could face.
Is the risk from the conquered tribes, or much closer to home?
As rebellion threatens to shatter a fragile peace, Hannah’s heart whispers that just maybe Max isn’t dead and that he is calling her home. Can she trust her heart or will she remain caught out of time, her destiny floating away like embers on a breeze.