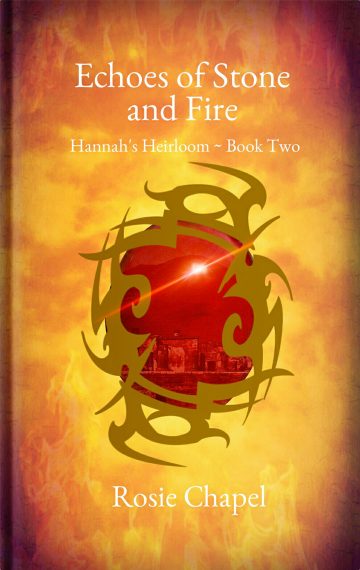 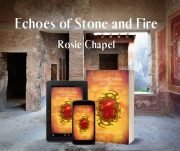 Echoes of Stone and Fire sees Hannah thrust back in through history, this time into life in AD79 Pompeii.

Pompeii was once a bustling port nestling under a forbidding mountain. Then in AD79, the mountain erupted, smothering the town under a thick blanket of ash and volcanic debris, leaving it lost for thousands of years.

Now, rediscovered and a world-renowned heritage site, archeologists from across the globe yearn for an opportunity to uncover to the town’s past. Some things though, are best left alone – revealing the secrets hidden beneath the stones could prove perilous.

Eighteen months have passed since Hannah and Max left Masada, Herod’s isolated fortress in the Judaean desert. The place where, just as they admitted their feelings for each other, they were wrenched apart. Hannah slipped into an ancient world, discovering how her ancestor had received the ruby clasp – her talisman. Somehow she survived the ensuing tragedy and Max’s love was strong enough to bring her home. Since then, Hannah has had no awareness of her ancient counterpart and wonders whether the slender thread that united them had been broken, lost beyond time, leaving only a memory. 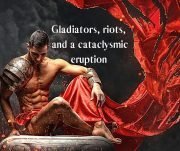 On a spur of the moment trip to Rome, familiar dreams recur. Unable to recognise where her ancestor is, but realising that she is not on Masada, Hannah struggles to understand the reason behind her visions.  Then, a chance meeting with two friends sees Hannah and Max invited to join an excavation team, one whose goal is to determine what lies beneath the ruins of Pompeii.

Although excited to be a part of such an investigation, Hannah experiences a growing sense of unease, an unnamed fear circling at the edges of her consciousness.

Her worlds being to converge and Hannah realises to her horror, that her fear, this reconnection of minds, must be related to Vesuvius and that the woman she is bound to was actually in Pompeii before the eruption.

Hoping she can somehow warn her ancestor without being drawn back into her other life, Hannah tries to convey her knowledge through her dreams. 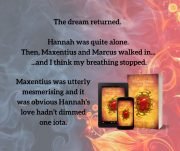 As before however, fate intervenes. After entering a house which bears a Hebrew inscription, Hannah falls back through time. Although familiar with this fusion of souls, she still has to rely on her instincts to adjust to life in ancient Pompeii.

A world where her ancestor is a physician to gladiators engaged in mortal combat, where riotous mobs run amok and where a ghost from the past returns to haunt her. All the while knowing she needs to save her family from the devastation that will befall this town.

Will Hannah escape the cataclysmic eruption?
Can she persuade her loved ones to flee before burning debris engulfs the town?
Will she ever find her way back to Max the love of her life waiting, not so patiently, millennia away?
Or will echoes be all that remain?

Echoes of Stone and Fire is available worldwide, in ebook and in paperback.