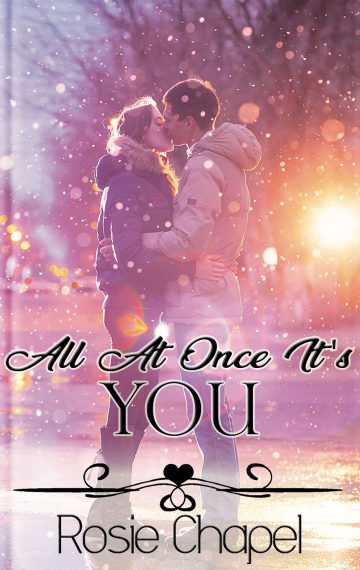 When Alex arrives in the small village of Rosedale Abbey, to take up a position as a research assistant for a renowned archaeologist, the last thing she is looking for, or expects to find, is love.

Jake was perfectly happy with the status quo. When it came to relationships, he didn’t do committed or long term. He called the shots, and if his current flame didn’t like it, she knew what to do. A philosophy, which served him well – until he met Alex.

When I finished writing Of Ruins and Romance, I did not expect to have another contemporary romance pester at me, and for a little while that was the case ~ historical fiction, singing it’s seductive song, drew me back into its embrace. Then Alex began yelling at me to tell her story. Ignoring her proved pointless, because to my frustration, until I at least started her book, I found I could not work on any of my other novels. Thus All At Once It’s You was born.

I grew up in the north east of England, with Rosedale – the location for All At One It’s You – little more than a stone’s throw from the village where we lived, and as a kid, I spent many a happy hour exploring. I love the boundless emptiness of the North Yorkshire Moors, the distant horizons and ever changing colours. While many might consider it isolated – bleak even – and uninviting, to me it has always felt like home.

Using North Yorkshire as a backdrop, also gave me the opportunity to include Fountains Abbey ~ my absolute favourite place on earth. A ruined Cistercian Abbey set in acres of beautiful parkland, Fountains Abbey holds a very special place in my heart, and if anyone is inspired to visit, physically or virtually, because of this book, you will see why.

Of course, I had to include some ancient stuff…you surely didn’t imagine there wouldn’t be, did you? A research assistant to an archaeology professor writing a book about Hadrian, offered endless possibilities. It also meant I could feasibly send them off to Rome, and Tivoli – where Hadrian’s Villa is situated – a massive and majestic ruin, with much yet to be excavated. It was not unusual for an emperor to have a country retreat, and in his later years, Hadrian who apparently was not enamoured of the Imperial palace on the Palatine Hill at Rome, governed the empire from this vast complex.

As with Of Ruins and Romance, this story was inspired by my love of the Mills and Boon novels I read as a teenager – I have no idea whether they have changed. All At Once It’s You, is a gentle romance with a few ups and downs, and just a  little sizzle. When Alex meets Jake – son of the aforementioned professor – their relationship doesn’t get off to the best start. Eventually finding common ground, both hide painful memories, which may yet undermine their tentative romance.

All At Once It’s You is available worldwide from Amazon, and is free on KU.